How The Experts Are Measuring The Economic Recovery

In early June, the National Bureau of Economic Research made it official: The United States was in a full-blown recession. Joblessness had risen to historic levels, total production was down, and industrial activity slowed to a crawl. Just like that, the COVID-19 pandemic had extinguished the longest period of expansion in U.S. history.

Ever since, the signs of recovery have been confusingly mixed — unemployment has improved more quickly than expected and the stock market has shown surprising resilience, but other indicators have looked much worse. So how can we know when the economy is truly recovering? As part of our ongoing survey of economists, conducted in partnership with the Initiative on Global Markets at the University of Chicago Booth School of Business, we asked experts which metrics they have their eye on to judge the strength of the recovery now — and what they’re looking at to predict where the economy might be headed next.

[Related: Where The Latest COVID-19 Models Think We’re Headed — And Why They Disagree]

In terms of measuring the recovery, economists are looking most closely at gross domestic product. Given three options to describe the level of attention they paid to GDP, 81 percent of our respondents said they were watching it “very closely,” with another 16 percent saying they were looking at GDP “somewhat closely” and only 3 percent saying they weren’t following it closely at all.

The next-most watched statistic was the unemployment rate, which also shouldn’t be surprising; both GDP and unemployment are key lagging indicators, or important metrics that show how the economy has been doing. According to the survey, retail and food sales also belong in that category — particularly in this pandemic, since the hospitality and retail sectors are among the industries harmed most when virus-related shutdowns force businesses to close.

Based on the three main indicators economists said they’re using to judge the recovery, America has a long way to go before things are back to their pre-pandemic baseline.

After mostly cruising along at between 2 and 3.5 percent annualized quarter-over-quarter growth for years, real GDP dropped by an annualized rate of 5 percent from the fourth quarter of 2019 to the first quarter of 2020, which contained only about one month of coronavirus-related effects (although the National Bureau of Economic Research says the recession technically began in February 2020). The Federal Reserve Bank of Atlanta’s GDPNow model estimates that second-quarter real GDP will end up being down by an annualized rate of 35.5 percent — seven times worse than the first quarter — when the Bureau of Economic Analysis releases its official number later this month.

[Related: The Economy Is A Mess. So Why Isn’t The Stock Market?]

Similarly, the unemployment rate is currently 11.1 percent, an increase of 7.6 percentage points from February — and still higher than any level it had reached from 1948 through March 2020. When the Congressional Budget Office released an update to its long-term forecast for the decade earlier this month, it projected that the unemployment rate would remain above its pre-pandemic level for the rest of the decade.

Retail and food sales fell from just over $200 billion (in CPI-adjusted 1982-84 dollars) in February to $161 billion in April — a massive drop. But thanks to reopening stores, it rallied to just shy of $190 billion in May, and will likely be even higher in June if consumer spending data is any indication. Those gains are tenuous, though, endangered by rising case counts across the country that have already forced some types of businesses to close again. There figures to be a tight inverse relationship between the virus’s spread and retail/food businesses’ ability to stay open, which is a big reason to watch this indicator going forward. 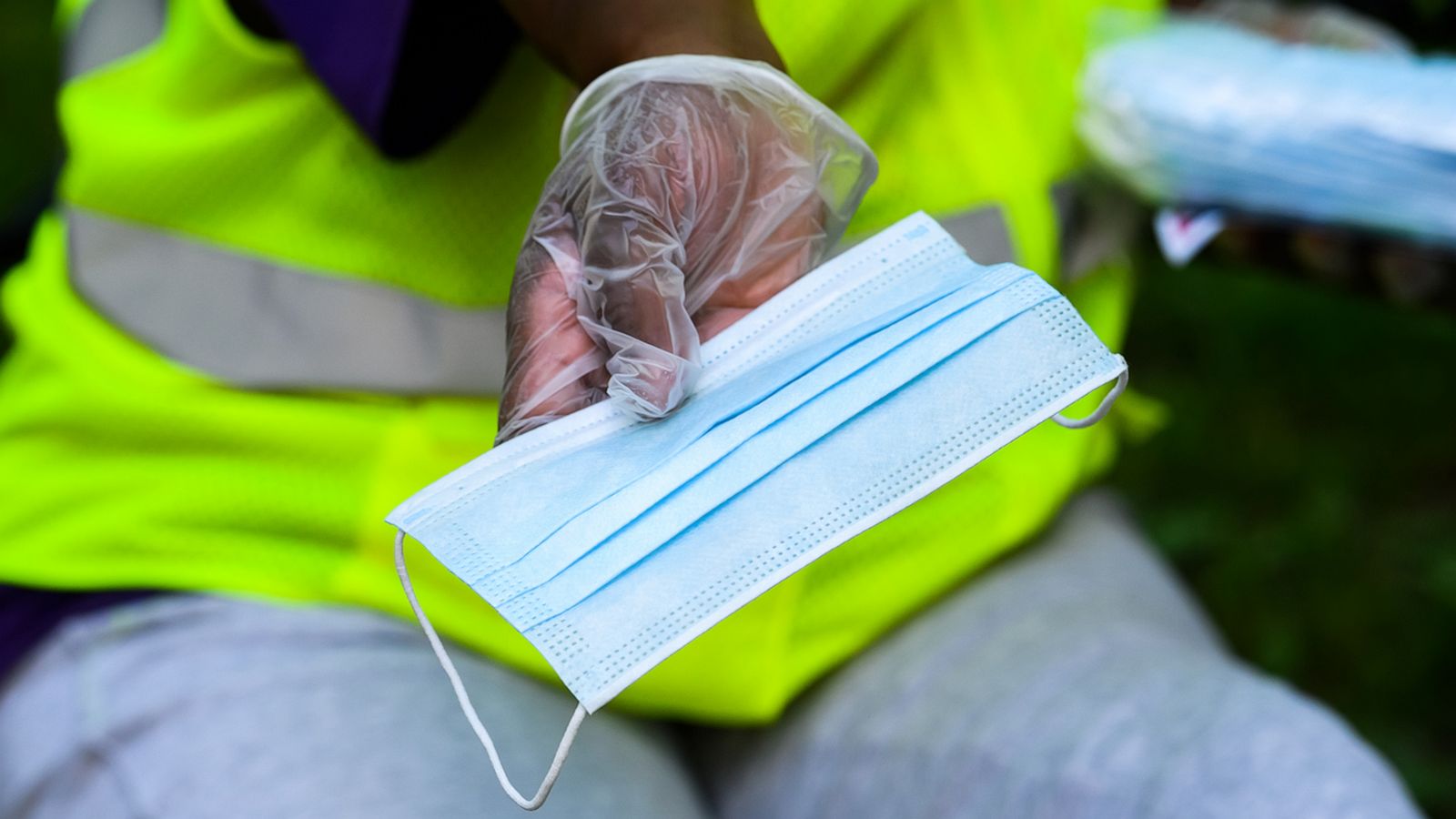 That’s not to say these are the only metrics that might prove to be insightful. “Interestingly, consumer confidence and the savings rate are being followed less closely,” said Allan Timmermann, a professor of finance and economics at the University of California, San Diego, after he reviewed the survey’s findings. “I found the latter a bit surprising because we have seen from earlier crises that consumers can be scarred by large macroeconomic shocks, particularly when they occur in peoples’ formative years, and if precautionary savings go up by a lot – as we have seen in April and May already – then consumer spending will be lower and the recovery more sluggish.”

The big headline numbers are the ones economists seem to be focusing on most, meaning they are the metrics that should tell us where we are in the process of recovering from the recession. But as we mentioned above, they are fundamentally lagging indicators — and that is exacerbated by the fast-moving nature of the virus, a crisis for which our traditional economic indicators are almost uniquely ill-suited. Real GDP is only released quarterly; retail and food sales come out monthly, but give a snapshot of the month prior to when they are released. Even the unemployment rate only captures a glimpse of how things were in the middle of the preceding month. These days, things might have changed significantly by the time the numbers come out.

[Related: The Unemployment Rate Is Falling, But More People Are Losing Their Jobs Permanently]

That’s why we also asked our survey panel which of the faster-moving data sources might tell us where the major indicators above are headed. Of the options we presented, the only one economists were clearly watching was consumer spending, which was considered “very useful” by 65 percent of respondents, and at least “somewhat useful” by the remaining 35 percent of those surveyed.

A clear second tier of usefulness formed around initial unemployment claims and job postings from various recruiting sites. The panel was split roughly 50-50 over whether each was “very” or “somewhat” useful, but no respondents thought they offered zero value.

(The economists were less impressed with mobility data such as traffic — i.e., miles driven — or trends in cellphone tracking data, though the majority acknowledged them as at least somewhat useful data points.)

[Related: The Industries Hit Hardest By The Unemployment Crisis]

It’s still early, but consumer spending seems to be on the rise. According to the extremely useful Opportunity Insights COVID data dashboard, overall consumer spending — based on credit and debit card usage data collected by Affinity Solutions — in early April was down about 33 percent (compared with January), but made consistent strides between then and mid-to-late June. By June 22, spending was down only around 6 percent relative to January levels. But the wave of June coronavirus cases across the country has clearly slowed spending: as of July 1, it was back to down 9 percent compared with January. 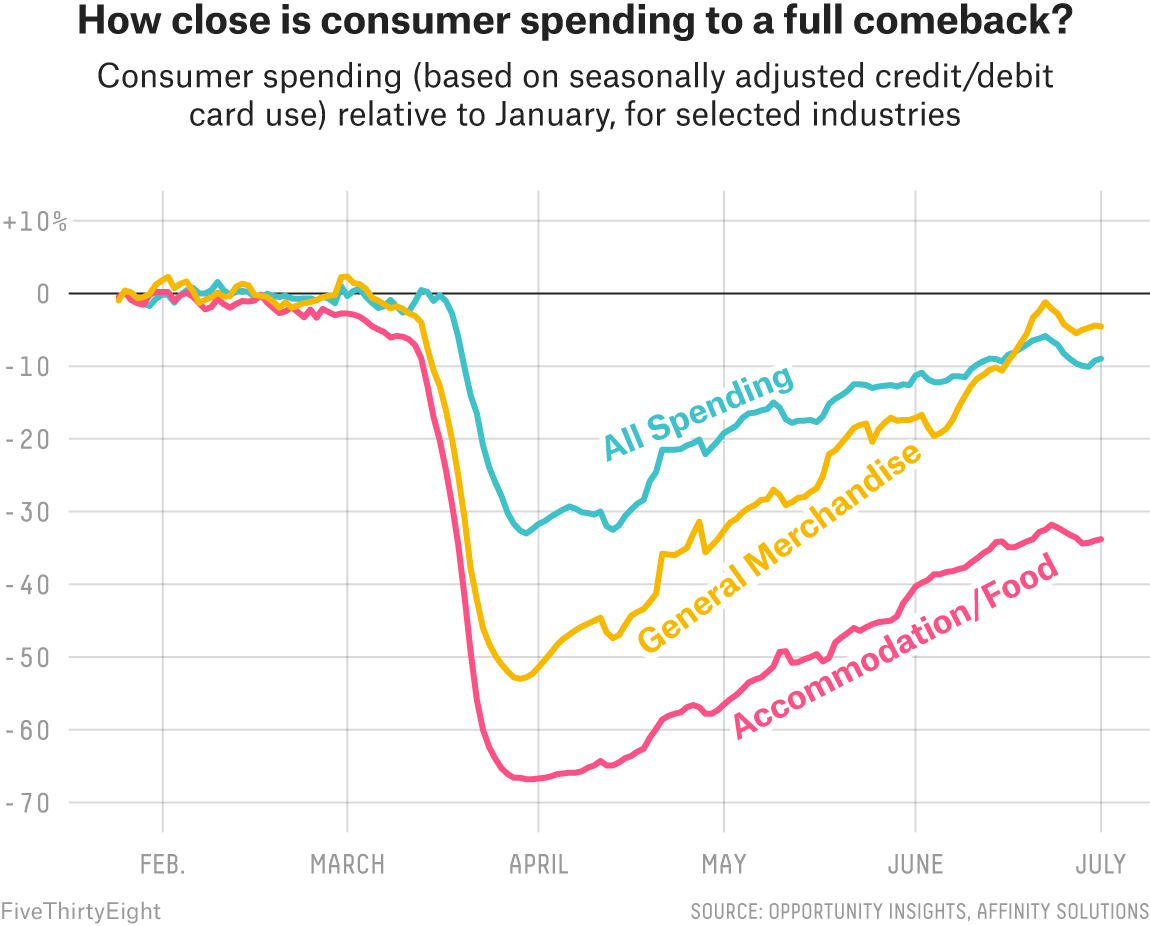 High-frequency employment data tells a similar story. According to Indeed, job postings have steadily improved from their low point on May 1 (down 39 percent relative to 2019), but they remain 23 percent below their level from a year ago. Initial claims have dropped every single week since March 28 — that’s 14 consecutive weeks — but only by an average of 4.3 percent per week over the past four weeks, compared with an average weekly decline of 13.6 percent over the 10 weeks before that.

Such real-time data is a welcome addition to the slower, monthly or quarterly pace of most official releases that make up the canon of important lagging indicators. In fact, the lack of reliable, quickly updating data has been a hallmark of this crisis, whether it be public health or economic data. So how will we know when things are better? According to our survey, we’ll get there when real GDP returns to form and unemployment is reduced. And the early clues might be hidden in people’s willingness to spend. But no matter what you look at, most economists agree: It might be a very long time before we reach a full recovery.