For the past few months, Alicia Wertz has barely seen her husband. Since schools closed in their northern Alabama town in March, they’ve been single-mindedly focused on a single goal: making sure that someone was watching their three kids. At first, Wertz tried working from home. But she wasn’t getting anything done, so they tried splitting the hours: Wertz’s husband watches the children in the morning, then a sitter comes to relieve him in the afternoon until Wertz takes over when she returns from work.

“When we’re not working, we’re by ourselves with the children. It almost feels like you’re a single parent. All you do is go to work and care for the kids,” Wertz said.

In her mind, Wertz is counting down the days until schools reopen. But there’s a nagging worry at the back of her head — what if they don’t open at all? “The thought of [my kids] not going back in the fall is devastating,” Wertz said when we spoke in early July. “It raises this question of — if one of us has to stay home with the children, whose job is more important? I think it was something that we did have conversations about before, but COVID-19 has made it much worse.”

[Related: Where The Latest COVID-19 Models Think We’re Headed — And Why They Disagree]

Wertz isn’t the only working mother for whom the thought of the fall calendar sparks both relief and dread. And what comes next could have disproportionate — and long-lasting — effects on the careers of countless women across the country. Studies have shown that women already shoulder much of the burden of caring for and educating their children at home; now, they’re also more likely than men to have lost their jobs thanks to the pandemic. And the collapse of the child care and public education infrastructure that so many parents rely on will only magnify these problems, even pushing some women out of the labor force entirely.

“We’re in danger of erasing the limited gains we’ve made for women over the past few decades, and especially women of color,” said Melissa Boteach, Vice President for Income Security and Child Care/Early Learning at the National Women’s Law Center.

The crux of the issue: Child care just isn’t as available as it was before the pandemic. Data provided to FiveThirtyEight by the job-search website Indeed shows that child-care services have been much slower to hire again (a useful proxy for re-opening) than other areas of the economy: 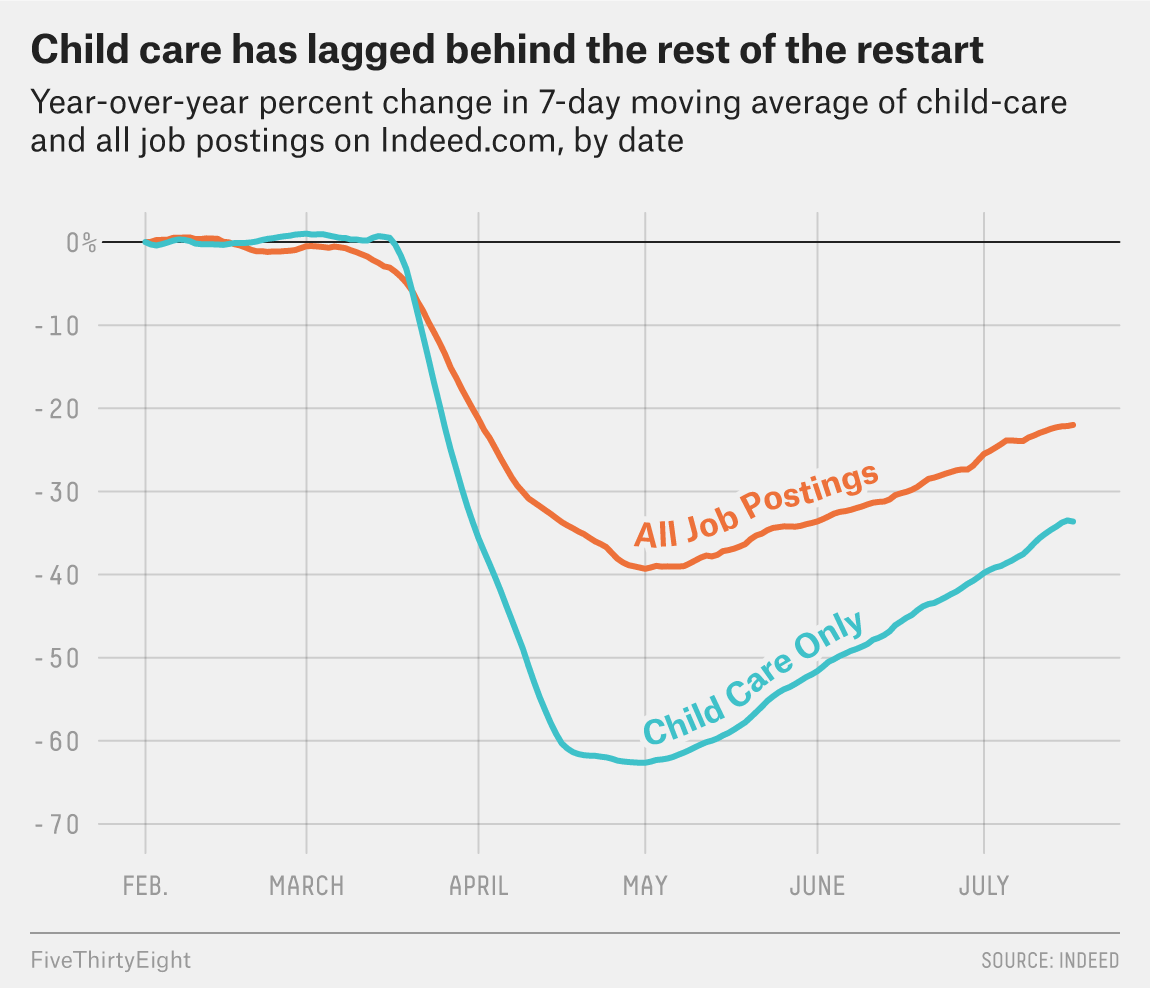 Combine that with the news that many schools will remain closed in the fall, and it’s easy to see the crisis at hand. If polling is any indication, the vast majority of the fallout is being weathered by mothers, who were already doing the majority of household work even before the pandemic began.

In 2015, the Pew Research Center asked parents about how they divide family responsibilities when both work full-time. Some tasks were split relatively evenly: Twenty percent of respondents said the mother disciplined children more, 17 percent said the father disciplined more, and 61 percent said that responsibility was shared equally. For every task, however, more respondents reported that the mother carried a greater amount of the load than those who said the father did — including areas involving managing children’s schedules, caring for children when they’re sick and handling household chores.

Along similar lines, Pew also found in a poll from 2019 that 80 percent of women living with a partner who had children did the primary grocery shopping and meal-preparation duties for their families. And according to the Bureau of Labor Statistics’ American Time Use Survey — which tracks the average amount of time people spend per day on different categories of activity — married mothers with full-time jobs spent 56 percent more time doing childcare and housework than corresponding fathers. By contrast, fathers spent more time on work-related tasks, travel and leisure activities.

Now, with schools closed and day cares struggling to remain open, even more women may conclude that the best — or perhaps the only — choice for their family and their own sanity is to reduce their hours, or even press “pause” on their career.

“Sometimes I’ll get to a point where I’m like, ‘I’m so tired, I’ll have to go part-time to make it all work,’” said Lee Dunham, a lawyer who lives in Delaware. Since the pandemic started, Dunham has been mostly responsible for her 10-month-old daughter during the day — which means her work day doesn’t start until 8 p.m. and usually wraps around 2 a.m.. “I’m just basically not getting enough sleep because I’m watching the baby 40 hours a week and doing my job 40 hours a week. It’s really rough.”

Dunham feels she’s lucky to have an understanding employer who told her earlier this year that they’d be cutting all of their employees some slack because of the pandemic. But at the time, she added, everyone was assuming day care would be up and running by mid-summer. “It might be that I have to dial back my hours, which of course means I will get paid less.”

This kind of calculus already depresses women’s wages and makes it harder for their careers to progress. According to the National Women’s Law Center, mothers are typically only paid 71 cents for every dollar paid to fathers. In fact, a lot of recent research into the gender pay gap has found that much of it is simply due to the constraints on working mothers. For instance, a 2018 analysis of data from Denmark — which offers a counterpoint to the United States in terms of social safety net, yet still has a very large and persistent gender wage gap — found that women’s earnings drop significantly after having their first child, while men’s earnings aren’t affected at all. And crucially, several studies in the U.S. and other countries have found that the trajectory of wages for women who don’t have children resembles those of men, whether they have kids or not (although some research has actually suggested that becoming a father can contribute to men’s career success).

This disparity is particularly intense for women of color. Black mothers are paid only 54 cents for every dollar paid to a white father, according to NWLC; for Latina mothers, it’s 46 cents. Low-income women of color are also among the likeliest to have lost their jobs in the current recession. And they’re disproportionately likely to be the child-care workers who are being asked to come back to work, sometimes in unsafe working conditions, for low wages. “We’re in a vicious cycle where we need child care as one of the tools to get women to equal pay, and yet unequal pay is one of the primary reasons that women are pushed into staying home,” Boteach said.

[Related: How Americans View The Coronavirus Crisis And Trump’s Response]

Leaving the workforce, even if it’s just for a year or two, has ripple effects that can follow a woman for the rest of her life, even depressing her earnings in retirement. Finding a new job after a few years on hiatus can be very difficult for mothers, who may be stereotyped as less serious about their careers because they took time off to be with their children. One study from 2007 found that mothers were perceived to be less competent than fathers, and their recommended salaries were also lower.

During this pandemic, you can already see the disproportionate impact taking shape. The unemployment rate for women in April was 16.2 percent, higher than it has been in any month since at least 1948, before dropping to 11.7 percent in June — a percentage point higher than the rate for men (10.6 percent). Even more striking, labor force participation for women dipped to 54.7 percent in April before rising to 56.1 percent last month. Both of those numbers are reminiscent of the rates for women from the 1980s — back when the very notion of women in the workforce was still gaining momentum.

Wertz has no plans to leave her job — at least for now. “I worked incredibly hard to get to where I am now,” she said. “I essentially paid my way through school with no family support. For years I worked entirely too hard for not enough money.” Already, she worries that she’s perceived differently in the workplace because she’s a mother. “Even if it was just a year, I know how that gap would look on my resume,” she said. “If I had to take that step back, I just don’t know if I’d recover from it.” 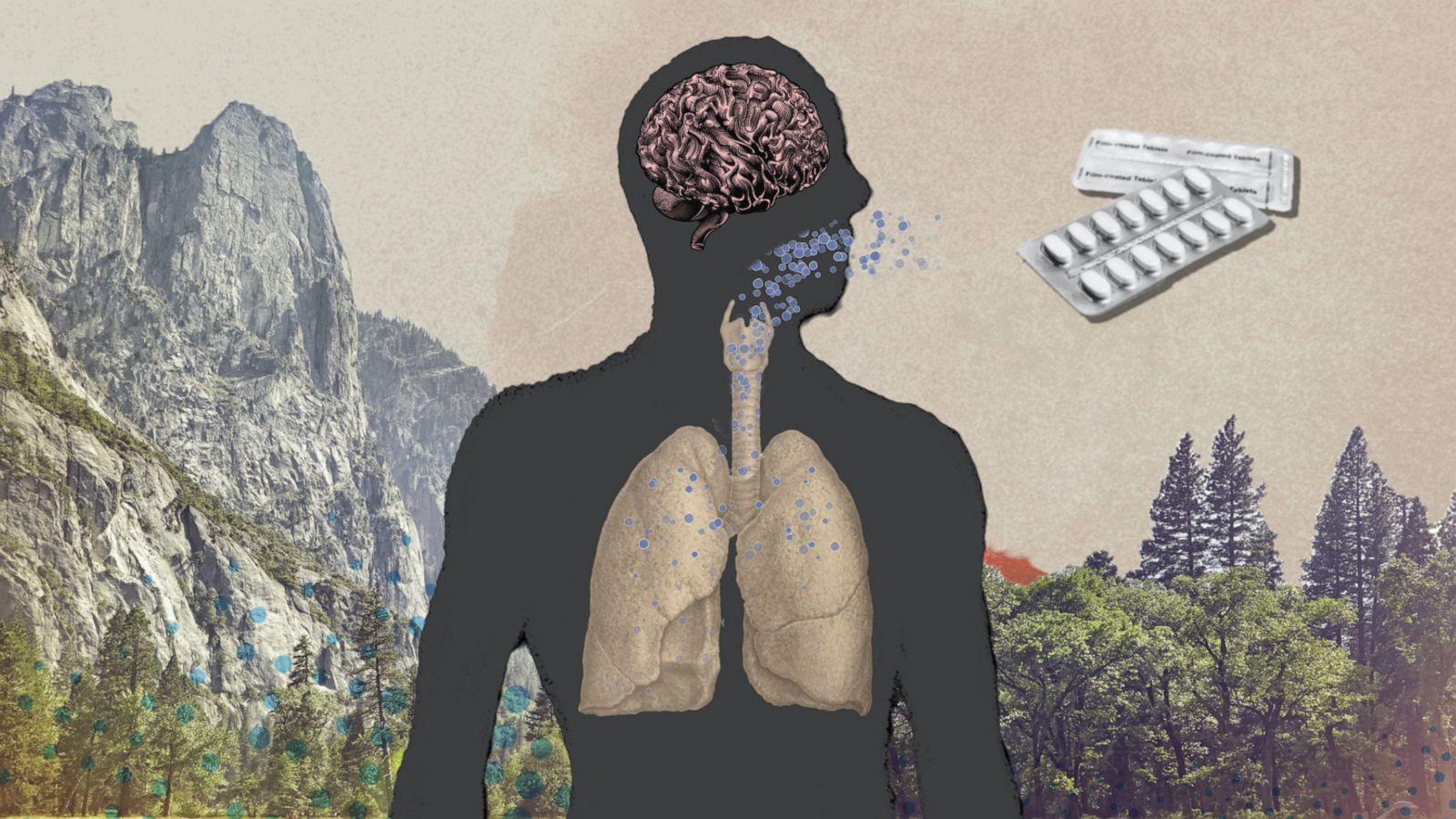