Texas might be the pickup truck haven, but that status was earned decades ago when owning a truck in the wide-open spaces of the Lone Star State made perfect sense. It’s 2020…the pickup truck rules all when it comes to the automobile of choice. Everywhere you look, trucks…four-doors, diesel duallies, lifted and lowered and hauling plenty around…even when there isn’t anything loaded in the bed. Trucks are quite useful, no question. But here’s something to think about…in Internet speak, there are “rules” that have certain guidelines that exist. For example, Rule 63: Every fictional character has an opposite-sex version of it somewhere on the web. If you know others…keep that crap to yourself. But there should be one for the world we have here: If it showed up with an engine installed and ready to go, somebody somewhere has made a racing vehicle out of it. The pickup truck, the bastion of country music, the hard-working American, and the definition of American vehicle to the rest of the world, makes for a hell of a racing vehicle.

On a beautiful, sunny Saturday, NCM Motorsports Park actually had two events going. One was a track-day deal that had everything from LS-swapped Mazda RX-8s to a fleet of “Spec Panther” Fords screaming around the main race track. But the cones were spread out on the huge pad out front for the Pro-Touring Truck Shootout, and the trucks were putting on a clinic for many. Think Optima-level monsters, muscle trucks that do more than just make noise and tire smoke. Think a ton of manual-swapped rigs, with Ford, GM, Dodge and even International examples making an appearance. Everything from a high-school build project to actual Optima competition vehicles were on hand and hot-lapping the whole day, while Arnie from Tricky Air-Ride managed it all with the grace and poise of someone who hadn’t slept more than a few hours in a week, juggling a constantly-exploding phone and a flurry of questions. Considering this is the inaugural event, he handled it like a pro.

We’ve got another batch of photos coming, but for now take a gander at some of the early action!

(Yeah, I’m re-running this, because I screwed up and forgot to actually put the freaking photo gallery in the story. Completely my fault, so let’s try this again. -ed.) 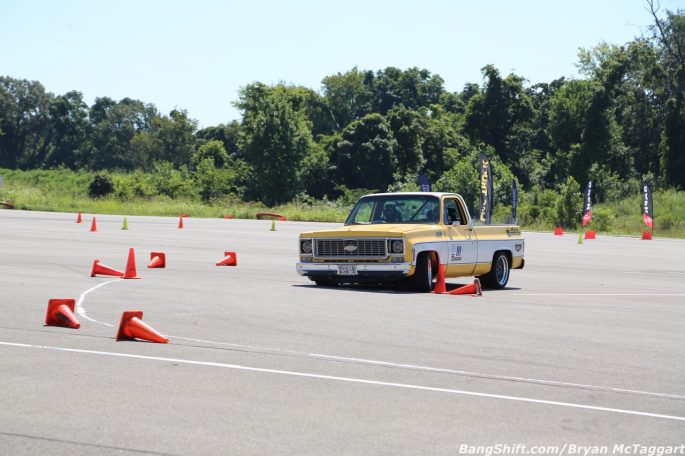 Be sure to click on a photo below to check out more action from the Pro-Touring Truck Shootout!