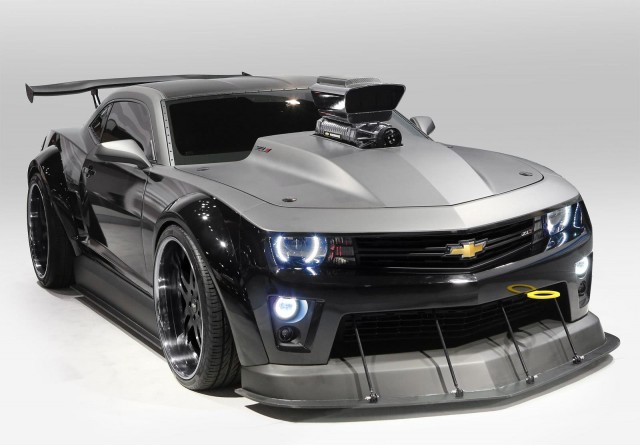 As part of a promotion for the new DreamWorks movie “Turbo” coming out on July 19th, Chevrolet used the Chicago Auto Show to introduce the 2013 “Turbo” Camaro Coupe. If the car looks like a Camaro ZL1 on steroids, that’s because it is based on this platform. The movie centers around a snail morphing into a speed-demon in order to make the cut at the Indy 500. Now, the ZL1 is no snail, but the mods definitely put this car in another class of its own.

The fact that this car is something special hits you in the face with the Mad Max-style front splitter, a monster rear wing and 5 inch rear exhaust outlets. And let’s not forget the massive supercharger sticking out of the COPO Camaro hood, which allows the V8 engine to produce in excessive of 700hp. All of this power is connected to an automatic transmission.

This concept car Camaro rolls on ginormous 24-inch wheels measuring 10 inches wide up front and a whopping 15 inches wide in the rear. As such, the suspension system has been tweaked with adjustablecoiloverstruts in front and custom spring and shock assemblies in back. To finish off the look, a vinyl chrome wrap has been applied and custom LED lights with a halo effect have been dropped in. Overall, this is a pretty wicked creation. The movie doesn’t look half bad either.