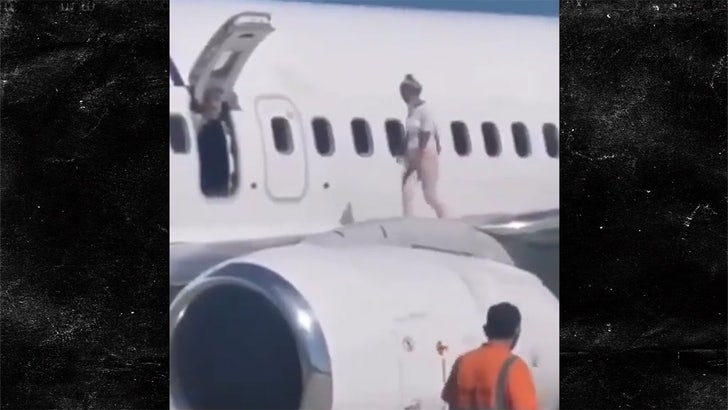 A Ukrainian woman was waiting in the wings for her chance to shine after a family vacation, and took it in a bizarre way when their plane touched down.

Check out this passenger aboard a Ukraine International Airlines flight that had just returned from Turkey this week — she just had to get off the plane one way or another, and opened an emergency exit to do just that … John McClane style.

In the video, the woman literally pops out of the exit and starts taking a little stroll along the plane’s wing, not looking to jump or anything … but to simply stretch her legs and get some fresh air.

That’s what she told airport authorities anyway when they questioned her about this … that she was hot and wanted to cool down. Doesn’t seem like the folks at UIA bought it though, because apparently her own kids were reportedly already deplaned when she did this.

So, in other words … it may very well have been a stunt for kicks. In any case, the woman is banned from flying with them ever again — the captain also apparently called in the cavalry to deal with her … airport security, border patrol and airline cops, the works basically.

Just goes to show, when you’re gonna dabble in this sorta thing … you’re doing so on a wing and a prayer ✈ (Sorry, that was awful)