GM Built The World’s First Hydrogen Fuel Cell Powered Vehicle In 1966 And We Found Video Of It – Sweet Van!

This unassuming GMC Handivan is actually one of the great feats of automotive engineering in the history of the disciple. Known as the “Electrovan” this was the first vehicle that ever derived its power from a fuel cell. In the case of Electrovan, it was a hydrogen/oxygen cell and it allowed the van to drive up to 70mph and cover a distance of 120 miles. It took a team of 250 people a couple of years to bring it to life and while the vehicle still physically exists today, it was never driven off of GM property and had a safety record that left something to be desired. Such is normally the cost when pushing the bounds of science as Dr. Craig Marks and his team did in the GM skunkworks during the middle 1960s. Believe it or not, this van was inspired by NASA as the space organization was the world leader in fuel cells and they had been using them on spacecraft to power various systems. They were “clean” and produced water that the astronauts could drink. Marks had the idea to investigate the feasibility of using them to shove the cars of tomorrow down the road. He proved his concept successfully and even though the research and technology did not flourish we’d certainly not call the Electrovan a failure. Marks proved that it could be done but it wasn’t sensible to do it with the tech at the time. To this day companies are working hard on fuel cells and GM is a recognized leader, due largely to these early efforts….so what was the problem? 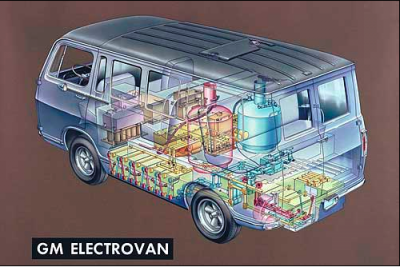 Here’s a cool look at the van and all of the “stuff” packed into it for the fuel cell. One of the problems is that the size of the system was cartoonish and there was barely enough room for two people to sit in the front seats. If the cell could barely fit in a van, there was zero shot of making it work in a passenger car. Additionally, there was enough platinum used inside the fuel cell itself to buy what Marks said amounted to a “fleet” of regular vans. If you can imagine the power that GM, Ford, and Chrysler had in those days to have HUNDREDS of employees and a leading engineer working full time on a project for two years that from the beginning never seemed destined for the road, it’ll blow you mind. Between the people and the equipment there were millions of 1960s dollars tied up in this thing and at the time, the company was hauling so much financial ass, it was no biggie.

With regard to the packaging of the van, here is what Bill Bowman wrote about the fuel cell (Bowman worked on the project) – Electrovan’s fuel cell powerplant supplied a continuous output of about 32 kilowatts and a peak output of 160 kilowatts. It consisted of 32 thin-electrode fuel cell modules connected in series. The motor and control system on the Electrovan were mounted between and under the two front seats. Located beneath the floor were the 32 fuel cell modules interconnected by some 550 feet of plastic piping. Also part of the installation were cryogenic hydrogen and oxygen tanks and an electrolyte reservoir mounted behind the middle bench seat. About 45 gallons of potassium hydroxide were required to fill the modules, the piping and the reservoir. This electrolyte alone weighed 550 pounds bringing the van’s total weight to 7,100 pounds.

Another problem was safety. Leaks occurred in the system with one report after an incident reporting that the van emitted “brilliant fireworks”. As pretty as that sounds, it was a scary proposition to be around this machine. The big incident on record was a hydrogen tank that exploded with such force that pieces reportedly landed up to a quarter mile away. This tank was obviously not in the van at the time and that was probably one reason that no one was killed or injured by it. When the van was about as proved out as it could be, GM invited journalists to come to Detroit and give it a spin…on company property. The project ended shortly after the media was able to see, drive, and marvel at the van and its (for the time) bizarre and space aged power plant. Shuffled between storage warehouses for years, nearly crushed flat a time or two, and refused entry by the Smithsonian (they had apparently not understood the significance of the van being the first fuel cell vehicle) it now lives where it should at the GM Heritage Collection in Michigan.

A short lived but cool chapter in GM history, the Electrovan proved that fuel cells could do the job and engineers continue to work today on fuel cell systems capable of delivering the kind of performance and longevity that nothing other than internal combustion has done so far.

PRESS PLAY BELOW TO SEE THE GM ELECTROVAN IN ACTION!

The post GM Built The World’s First Hydrogen Fuel Cell Powered Vehicle In 1966 And We Found Video Of It – Sweet Van! appeared first on BangShift.com.